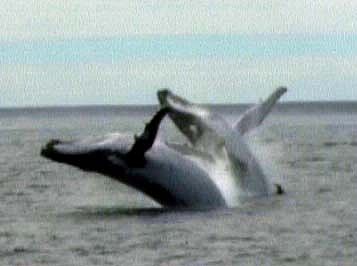 Humpback whales are seen off Coral Bay between June and October.

During June and July the animals are to be seen as they migrate north. Later, in October, the mothers and their calves can be seen outside the Ningaloo reef as they proceed south.

The Humpback whale is easily identified at close range by its knobbly head and long flippers. The black and white colouration on the underside of the flukes (tail) allows scientists to distinguish and name individuals all around the world. No two Humpback whales are exactly alike.

The Humpback has twin blowholes typical of all baleen whales. It's blow appearing as a single bushy spout extending to 3m (10ft) in height.